This year more than 50 theatrical plays from all over the world applied for the contest of the Festival of Ecological Theatre for Children and Youth.

Unfortunately, even after two years full of challenges for the organization of the Festival (travelling complication because of the measures due to the COVID-19 pandemic), the crisis is not subsiding. The world is now faced with armed conflicts, and new financial crisis can already be felt as a consequence, impacting all countries in the world and affecting all aspects of life, especially culture. Nevertheless, among this-year’s applications the Artistic committee of the Festival has had a very rich selection of plays both from country and the region, in an artistic sense. The audience from Bačka Palanka will not be denied the quality and content of the festival programme, all thanks to the organisational team of the Festival that has put in great efforts for such an international programme to the realized.

The basic criteria for the selection of plays have been, as always, their artistic quality and the possibility of performing within the technical abilities of the Festival. Additionally, this year all selected plays had to correspond in a way to this-year’s theme “MOVEMENT”, which has the aim to point to several problems that have movement as a common denominator:

Making a selection was not an easy task in the least, and the Artistic committee of the Festival has chosen 10 plays for the competitive selection to be presented at the 28th edition of FEP under the theme “MOVEMENT”.

Objects from everyday life, which are the main characters of this play, bring us the story of two superheroes: a tree-woman and a bird-man. The play “Mogućnost zabavljanja kod ptica” reminds us that the world is not and should not be anthropocentric and that people are just a part of the nature that also has its right to grow, flourish, fly, sing, run, peck, and even have fun. This ecologically enlightened play confronts the cold world of technology and objects with the world on nature, therefore creating apocalyptic scenes and experiences known to modern man, which are rarely seen in theatre. 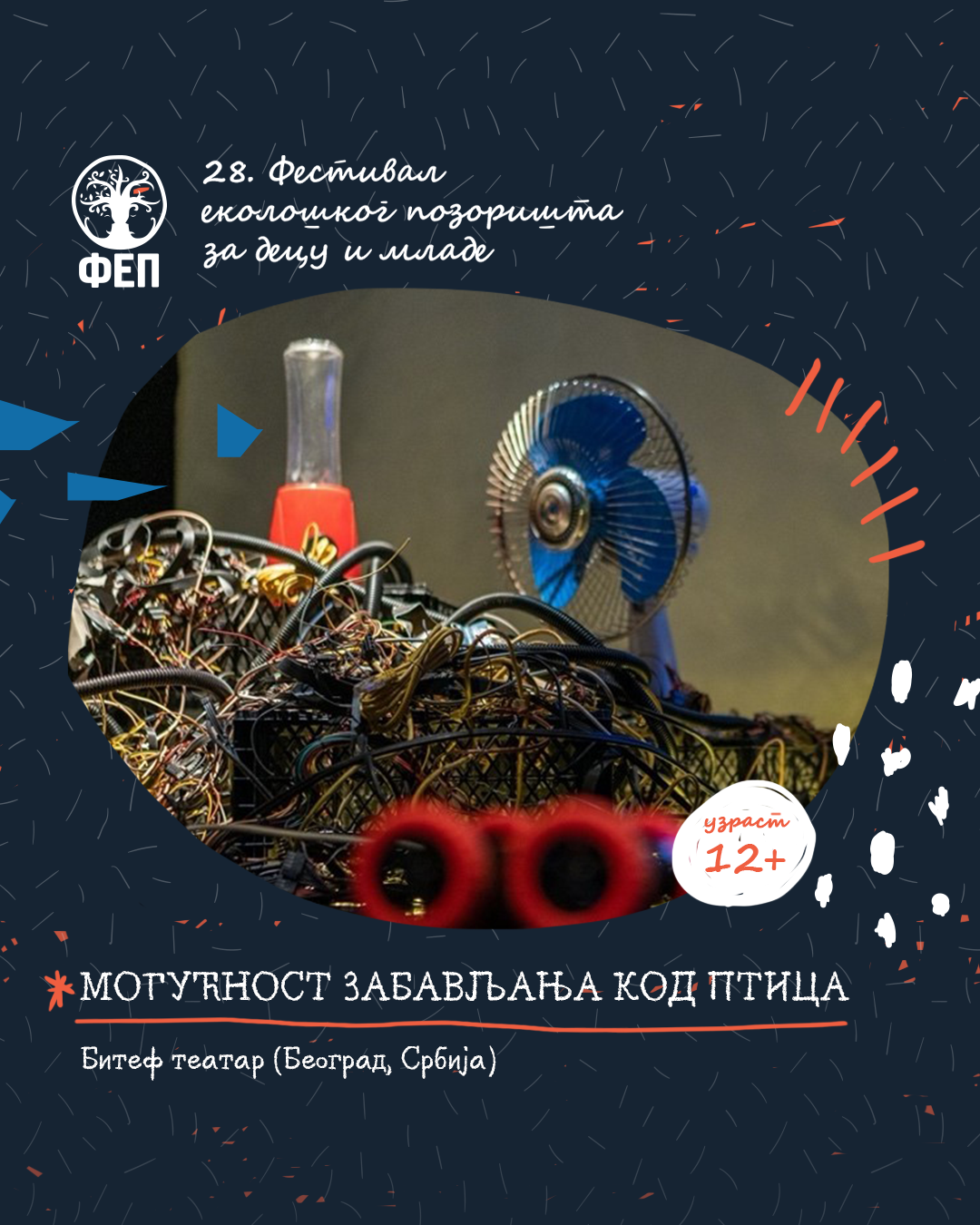 “Echoes of Celebration” ” is a theatrical concert that uses songs, dance and music from all over the world (European, Latin-American, Balkan music, etc.) to reconstruct old traditions and express gratitude. Baptisms, weddings and funerals are the most important celebrations in society in all cultures, and in these customary rituals and manifestations singing voice as an instrument had always been an important form of expression. This play celebrates life through songs, therefore creating space for remembering those who are no longer among us. 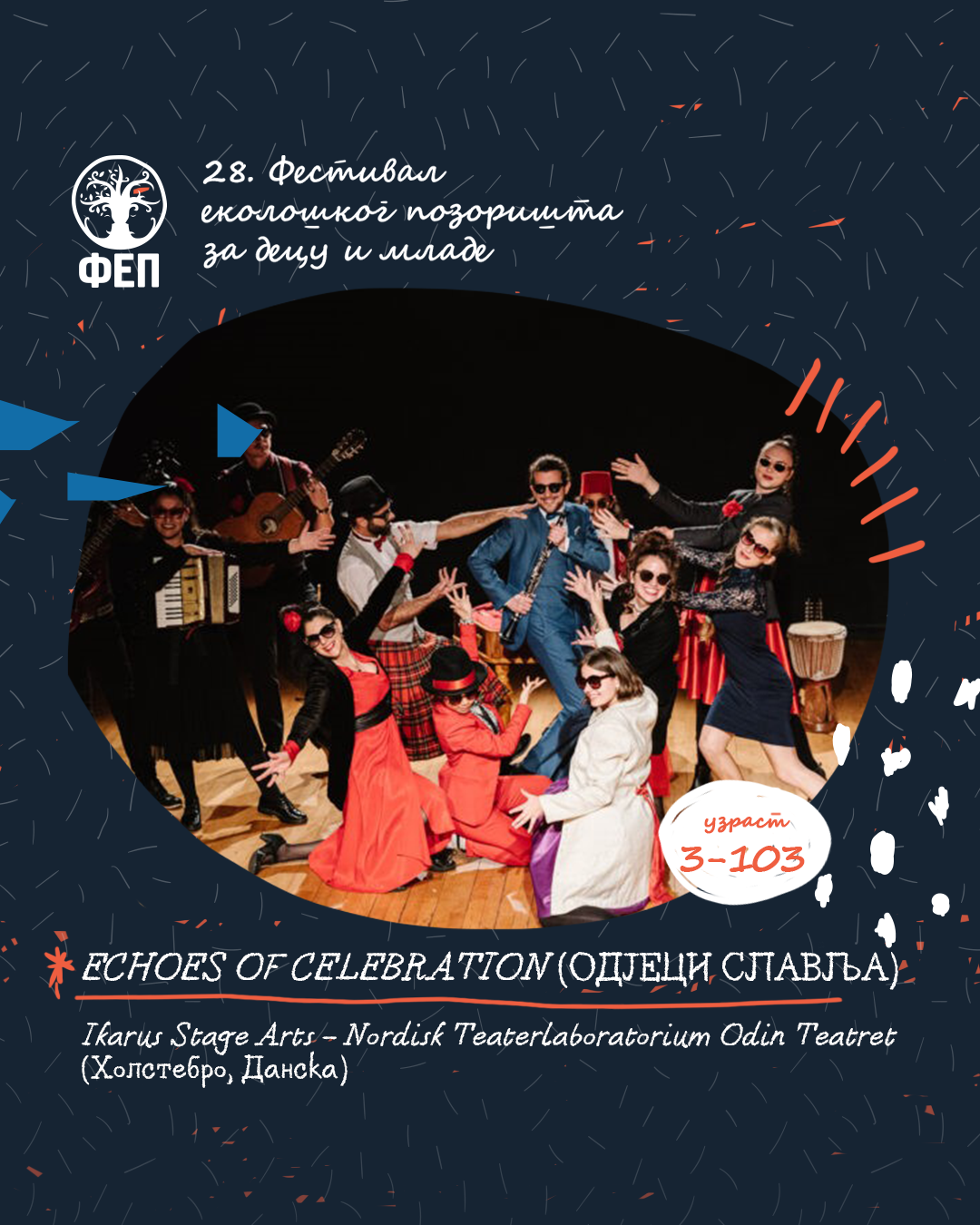 “Agnesa and Hrabren” is a story of two young people who do not fit in. Agnesa is a noblewoman who does not want to get married, and Hrabren is a young blacksmith who carries the weight of his father’s fame on his shoulders. One day, the two meet in the forest, both running away from pressures of their environment and unfulfilled expectations. This fairy-tale, inspired by local tradition and motives, speaks about bravery and friendship where two heroes win against roles imposed on them and encourage the youngest fans of theatre to think about stereotypes in society and breaking them down by following their dreams. 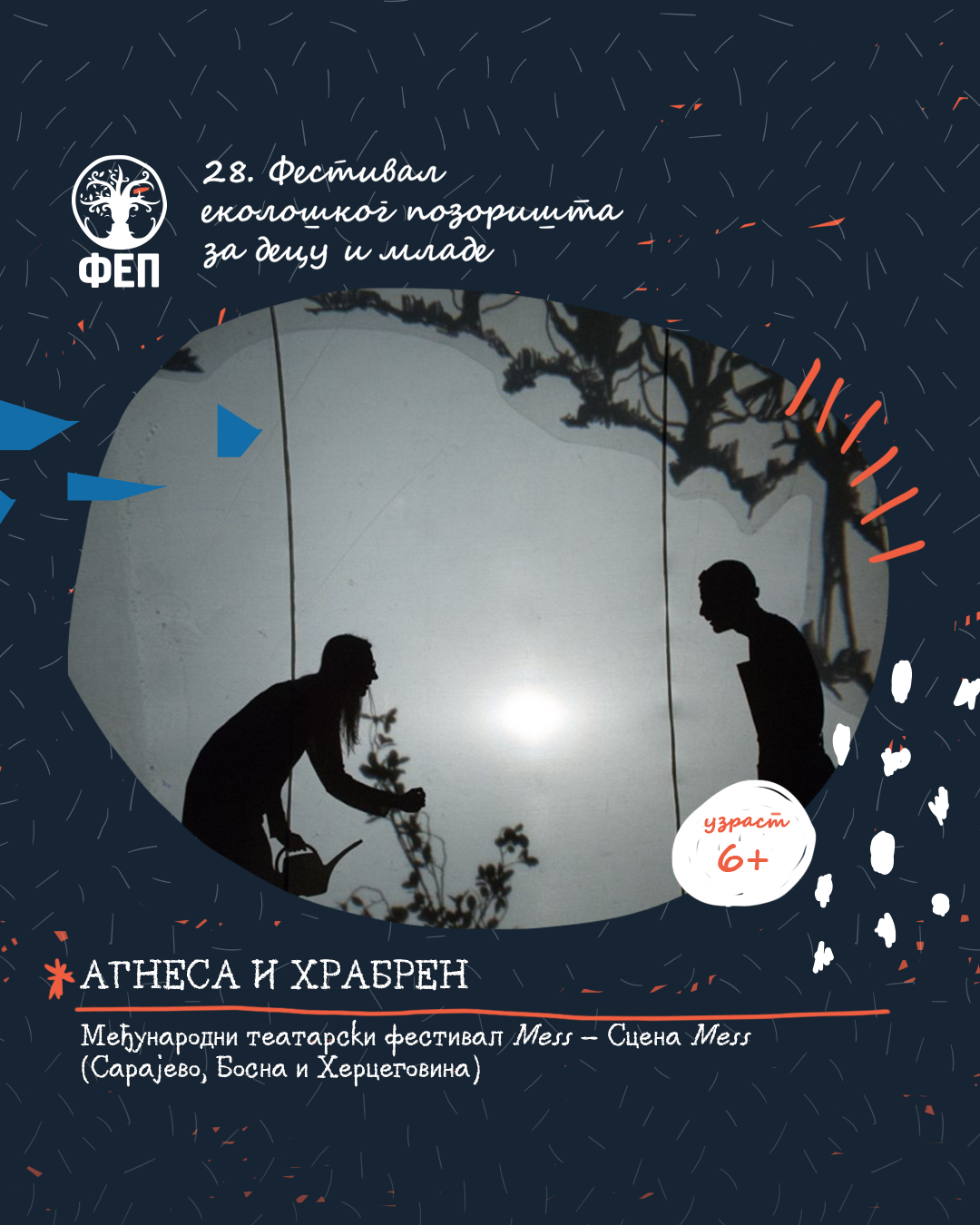 Theatrically-dance and interactive play “Astronauti” invites the audience to participate in the play from the very beginning: together with the performers, children do astronauts’ training as preparation for “travel into space”. The entire journey is followed by music that is created live, which makes this authentic theatrical experience both aesthetic and social in nature at the same time. 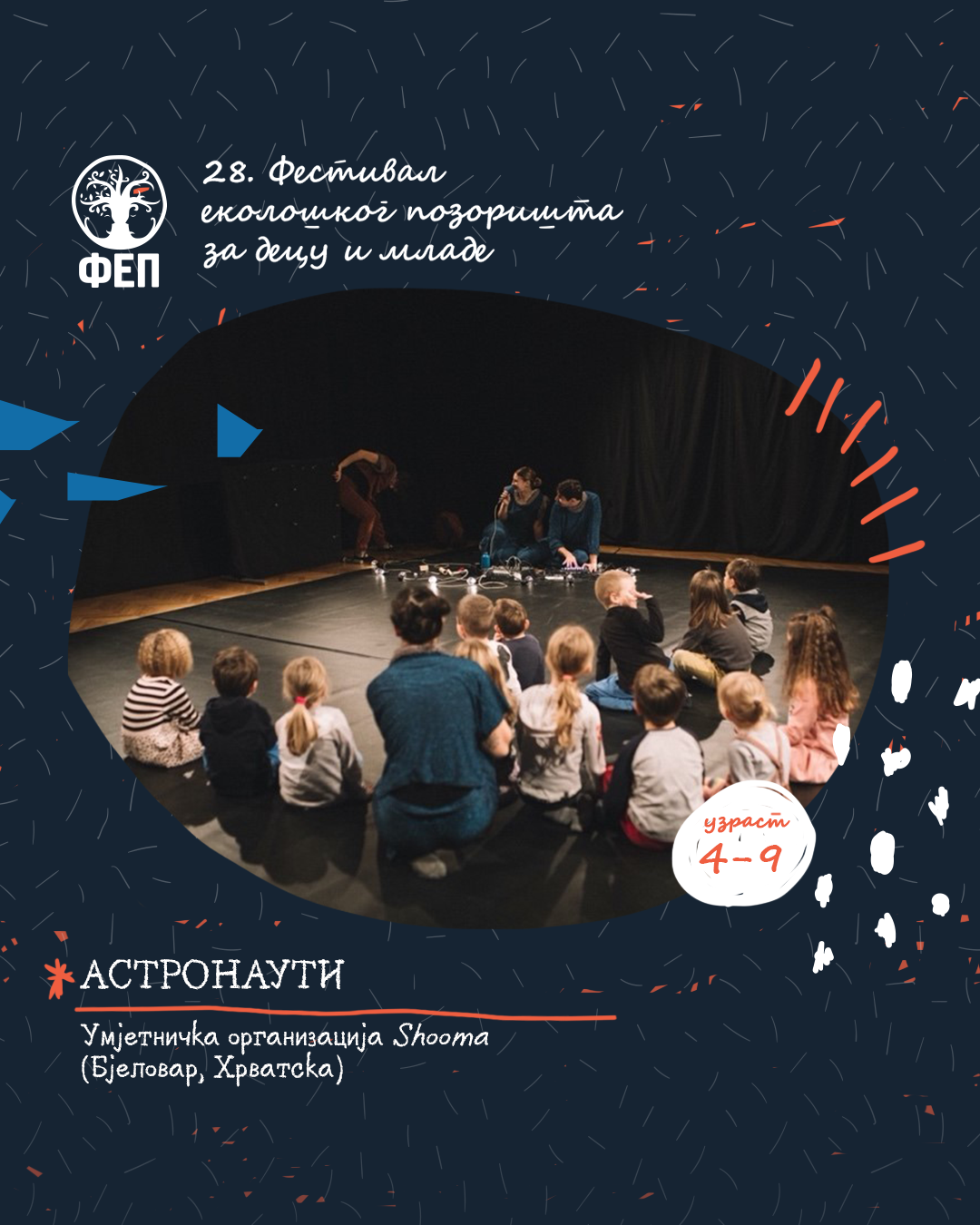 In a white a kingdom where the king is a white bear and all animals are white, a black lamb is born one day. Just because it is different the general opinion is that it is less worth, less beautiful and knows less. The play “Crno jagnje” brings important topics such as differences in society, life together, solidarity and beauty of accepting differences. 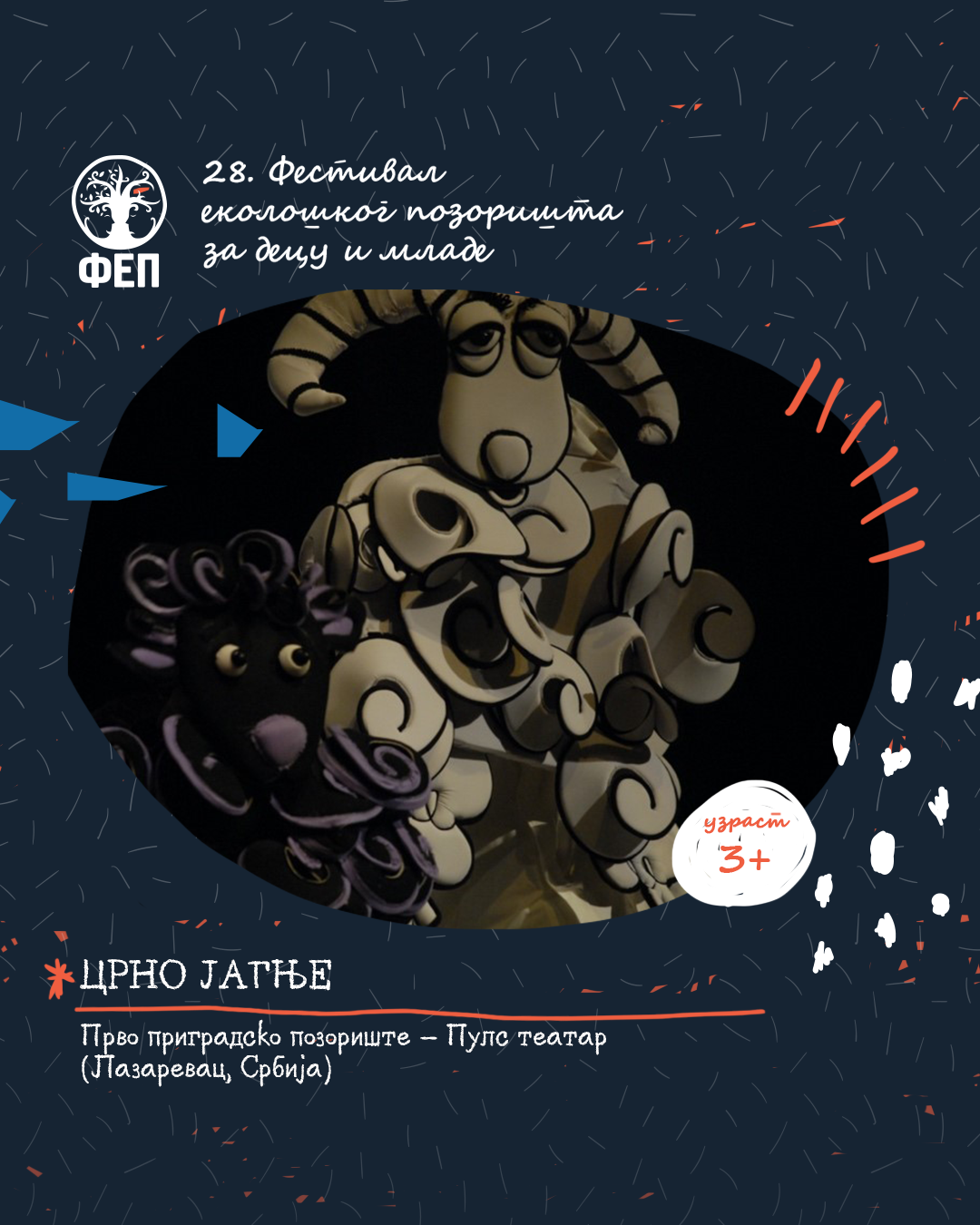 
Saturday, 20th August
Florida, 9.30 a.m. and 11 a.m.
*requires reservations on e-mail: ivana.milinkovic@fep.org.rs (no later than 16th August)
*number of spectators per showing is limited to 10 babies with parents

This show brings the unique experience of first discovering the ability of non-verbal communication and body instincts through a relaxed atmosphere in which all those present create a new play together every time, whether they are directly participating or just watching. “Baja Buf” is a happening, a play and a game dedicated to babies, and it takes place in a big and soft space that offers peaceful and safe environment. In “Baja Buf” children are free to decide for themselves when and how they want to participate, and adults are to show full respect for their decisions! 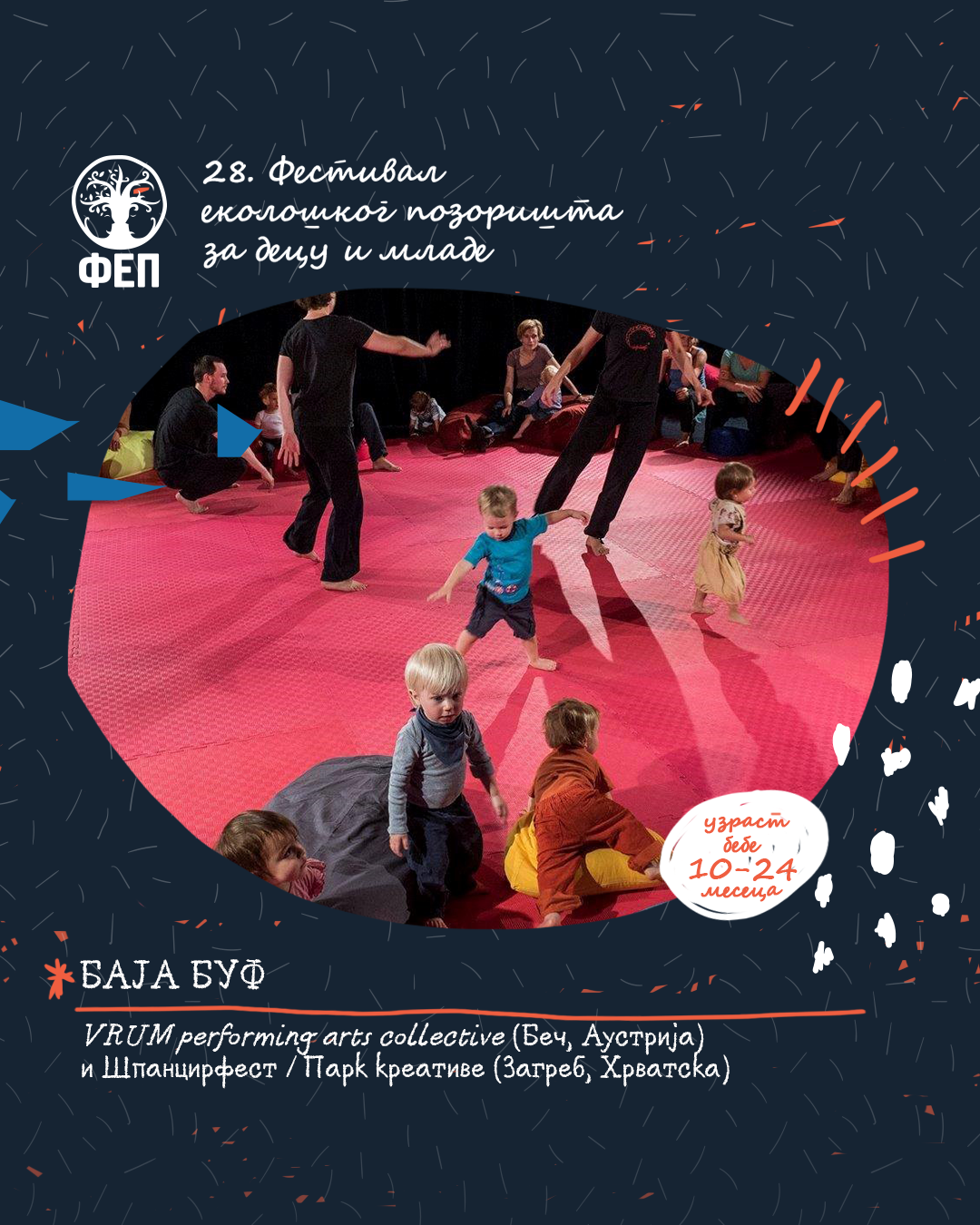 About a girl who faces emotions she cannot define nor understand. This poetic play talks not only about love, but also about friendship, moving away and how difficult it can be for children. However, what is most important, it speaks about how everyone deserves to love and be loved. 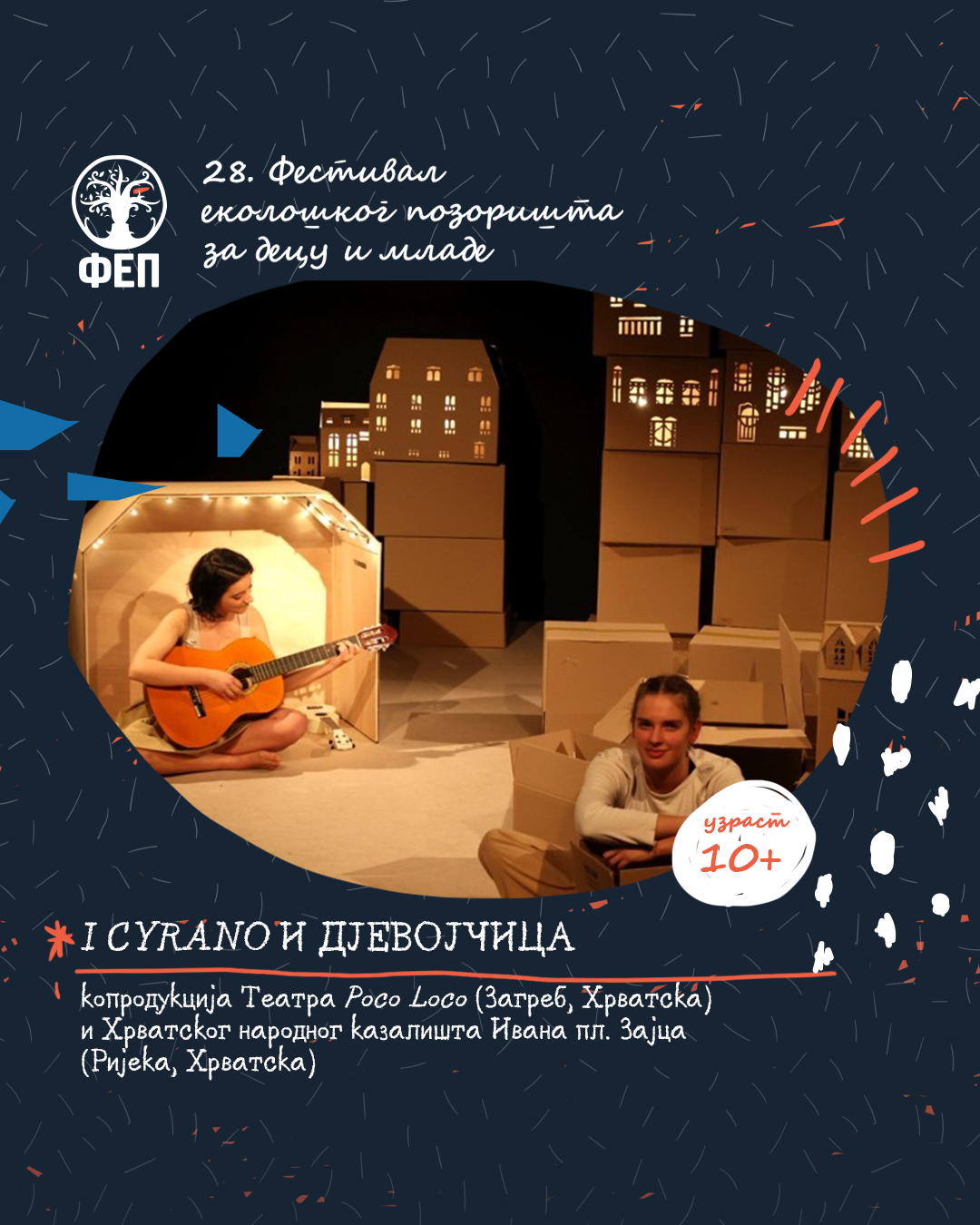 The play “Divljožder” јis a story about a boy and his journey which is a metaphor for looking within oneself and fears children face while growing up. 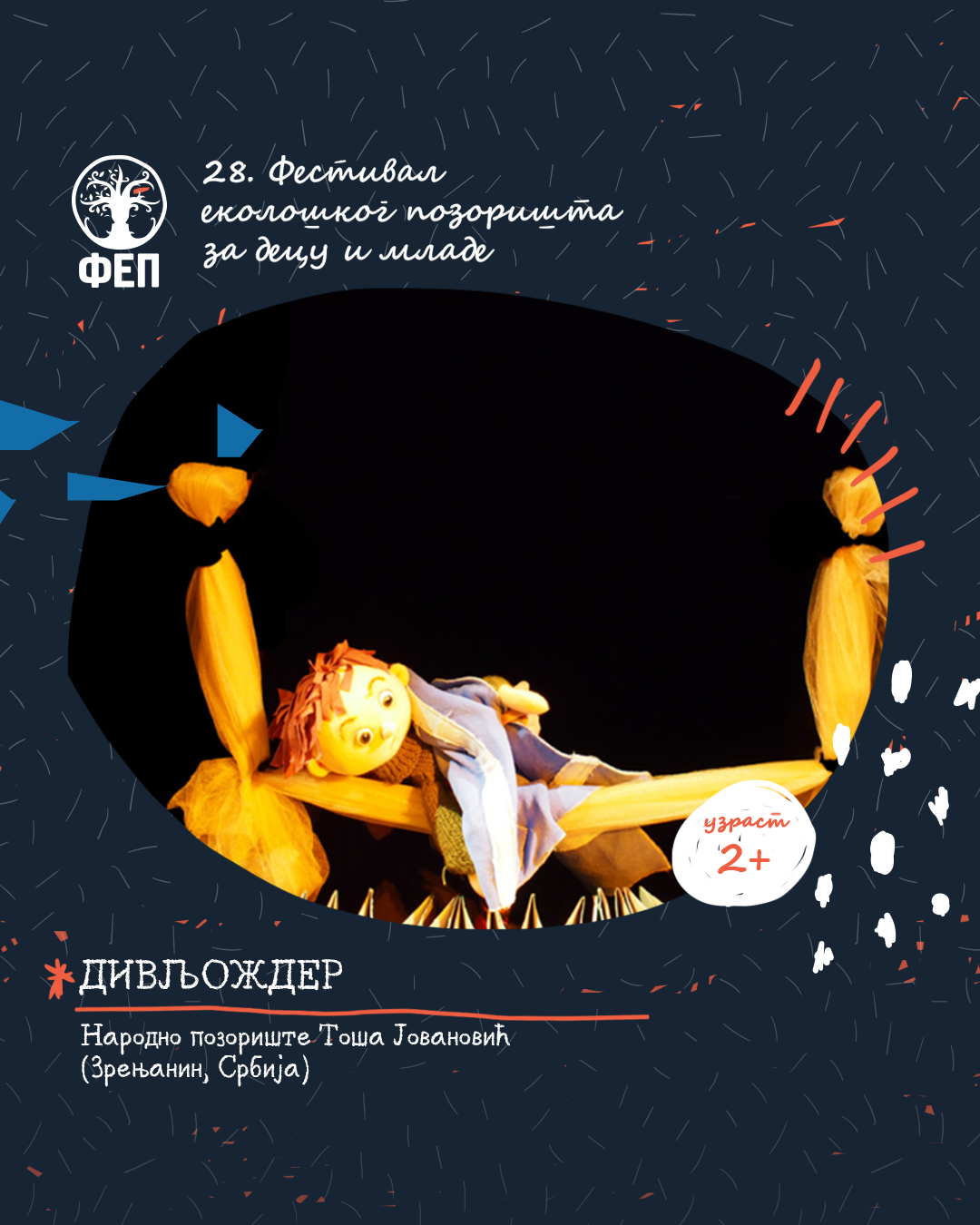 This ecologically-critical play is for all ages and speaks about the influence and consequences every human act on one side of the planet has on the other side of the planet through causality (the butterfly effect theory). Through poetic dance-visual story, in this play we will see how waste contributes to breaking of icebergs, climate changes and forming of plastic islands in the ocean. 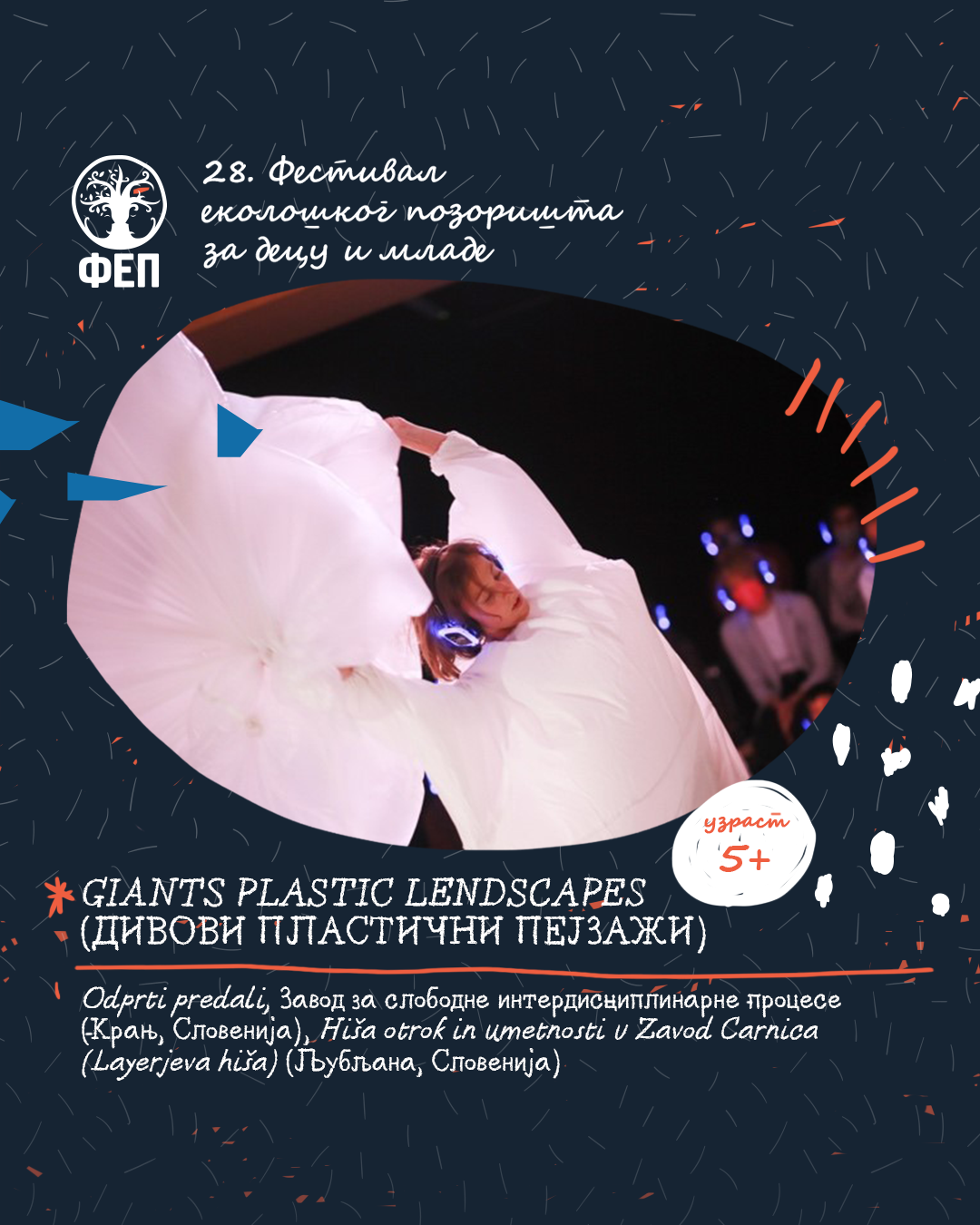 “Silent boy” ” is a puppet show without puppets – it is a dance of fingers and acting of the body, which are based on the principles of the so-called platform theatre, where the person on stage can be an actor, and a puppet, and a stage element, and a prop, all at the same. It is an emotional story of a boy who becomes forced to watch the world from silence after an unfortunate event. The play “Silent boy” is one of the most awarded plays for children in our country. It also uses sign language. 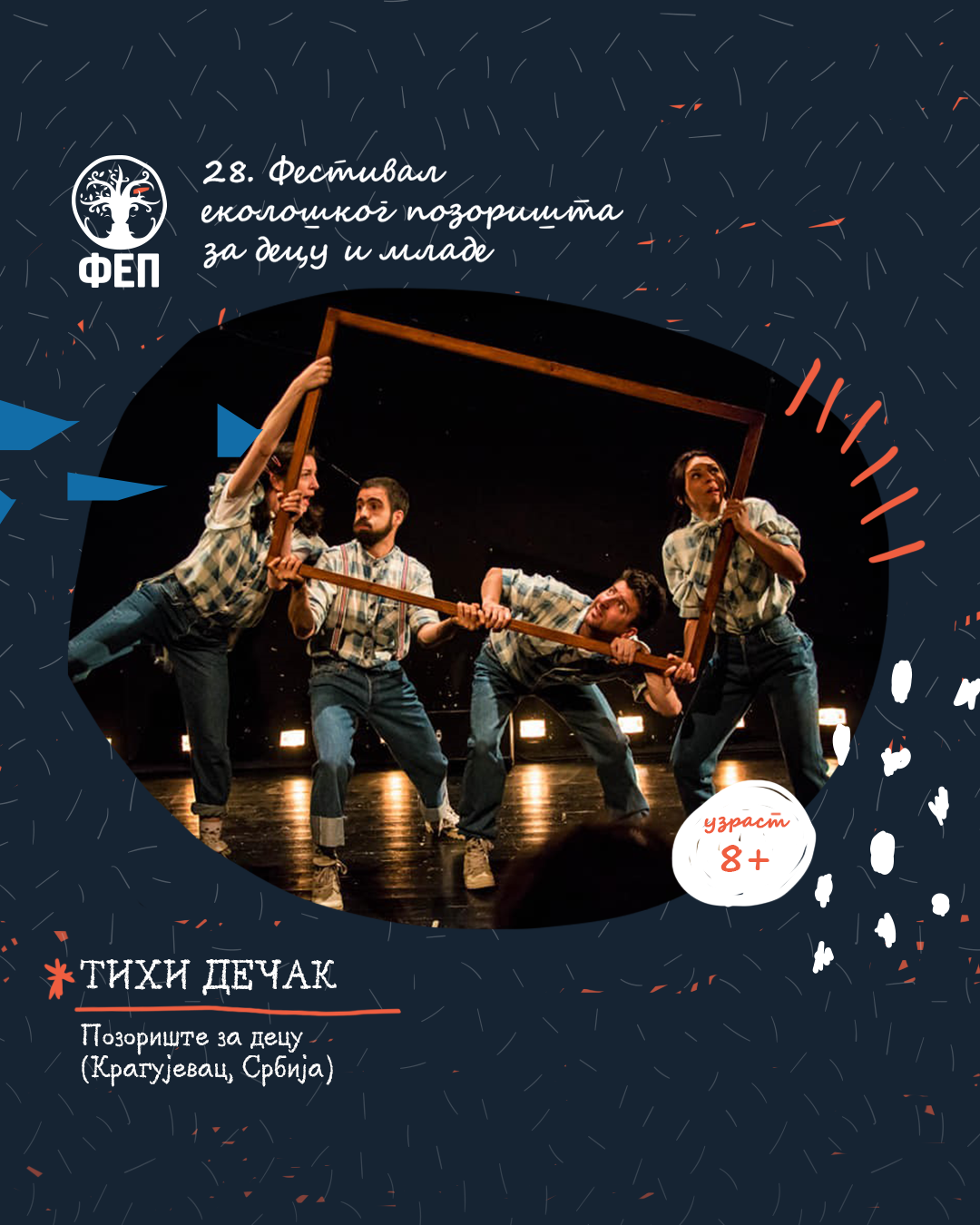